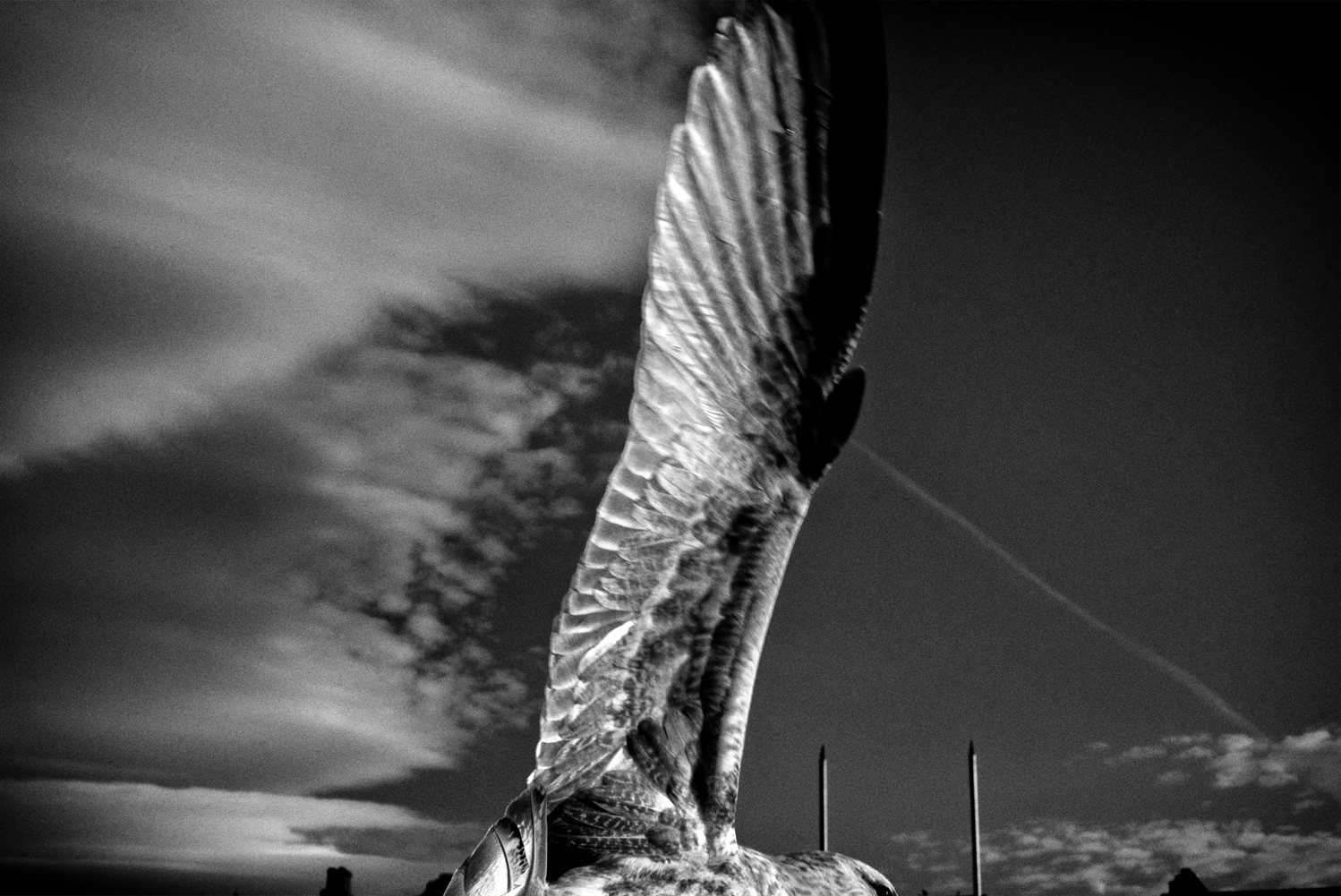 Eamonn Doyle’s second photo-book, ‘ON’, follows last year’s ‘i’, a widely acclaimed collection of street portraits that drew significant plaudits from, among others, Martin Parr. In ‘ON’, black and white figures stalk across Dublin streetscapes, by turns lost, menacing, wary, browbeaten or entranced – but always at odds in some way with their environment. Not just the physical environment of Dublin city, but also the virtual environment of the photo-book itself, because ‘ON’ is less a depiction of subjects organised around a unified theme than a depiction of subjects refusing a theme in the first place.

As in ‘i’, the photographs were mostly taken on Dublin’s Parnell Street and O’Connell Street. But here the historic role of those two streets as zones of resistance, protest and insurrection is far more present. The very title of the book itself evokes a resistance – that doggedly existential kind identified by Samuel Beckett’s narrator in ‘The Unnameable’: ‘You must go on, I can’t go on, I’ll go on.’

For these figures are always dynamic – muscles taut, heads in mid-turn, bodies in motion. Some flee the photographic gaze itself. Others stare challengingly down the barrel of the lens. Most appear caught up in projects so intensely private that they have an air of total inaccessibility. Rarely does the photographic act intrude so little on the lives of its subjects. Paradoxically, huge energy is found at precisely those moments when the unruly subjects look most likely to tear the images asunder.

The central drama of the book could thus be said to be its subjects’ struggle with representation – not necessarily against it, but writhing, wriggling, jockeying with it. The resulting images invariably draw attention to the photographic act. One never forgets that these images have been selected, framed, constructed. One is never tempted to identify the image with the subject of the image or to respond ‘I know exactly how that person feels.’ The interiority of the subjects is preserved; their dignity remains intact.

Yet ‘ON’ is neither a portrait of a city nor a treatise about its citizens. It is at once more modest and more passionately involved in its subjects. It forms not a coherent narrative revealing truths about the people depicted, but emerges as a series of deeply felt essays, attempts to glimpse elusive beings in motion. So its Dublin is not unified, but fragmentary – less a well-defined place than an archipelago. If ‘ON’ is a book about Dublin at all, it is about the impossibility of representing it. (One particular figure even blocks the first letter of a neon sign so that it now reads ‘ublin’.)

‘ON’ opens out to history more directly than its predecessor. Whereas ‘I’ was preoccupied with figures consumed by introspection, the dramas in ‘ON’ are far more environmental. Dublin’s hermetic seal has cracked open and the rest of the world has somehow spilled in. These subjects are photographed mostly from the front and from a lower angle. It’s a presentation that opens out their world, contextualising them by placing them against an architectural backdrop. Where the mysterious, often faceless figures of ‘i’ were often flattened against their worlds, the subjects of ‘ON’ stand out and strike out against their environments, often looming against skies in a way that speaks of possibility, even as they nurse wounds or eye each other suspiciously. And while the faces on display here are often squinting or averting their gaze, they are faces that speak of beings asserting themselves in their world, even as they flee the camera.